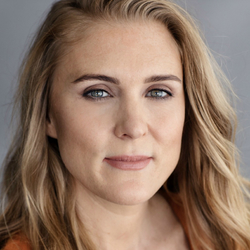 Aidee Walker is a renowned voice over artist, actress and director. Her debut short, THE F.E.U.C., was officially selected for the Palm Springs Film Festival (USA) and Show Me Shorts Film Festival (NZ). Her second short, FRIDAY TIGERS - funded by NZFC’s fresh shorts, was selected for MIFF, where Aidee was handpicked to attend the Accelerator Program. FRIDAY TIGERS won Best Short Film and the Audience Award at the NZIFF. Her third short, BREAK IN THE WEATHER, premiered at the Show Me Shorts Film Festival in 2016. In 2015 she lead an all-female crew in making a 48Hour short film and made the Grand Finals of the competition. It was officially selected for the Artemis Women in Action Film Festival in LA.

More recently, Aidee played the lead role in CATCHING THE BLACK WIDOW, and lawyer, Ingrid Squire in IN DARK PLACES and Amy in THE BROKENWOOD MYSTERIES 5. She directed the web series, STAND UP GIRL for NZME and last year she directed two episodes of WESTSIDE 4, while 7 months pregnant - becoming the show’s first ever female director. Aidee has directed on WESTSIDE and on THE BROKENWOOD MYSTERIES. Aidee stars in the TVNZ drama ONE LANE BRIDGE has just directed MYSTIC, a family drama for CBBC, TVNZ and Channel 7 in AUS.