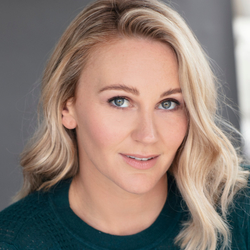 Amelia is a trained actor and studied at Toi Whakaari: NZ Drama School. She played popular Bella Cooper on Shortland Street for six years and has continued to work consistently in film, television and theatre roles.

Her voice is warm and up-beat with a wonderful husky tone. With her formal acting training she is able to adapt easily to character voices and accents and is a pro at taking direction.