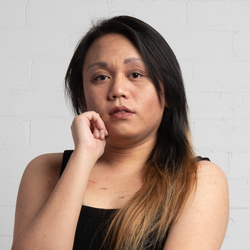 Dom Dinh is a transgender voice actress, born and raised in Melbourne, Australia. After falling into remote voice over in 2015 as a hobby, she's slowly been working by making it into a professional career to help push the letter of Australian accents in media. She's had the privilege of working in various character roles across anime, animation, and video games, with companies such as Crunchyroll, Well Go USA, Rooster Teeth, and more!