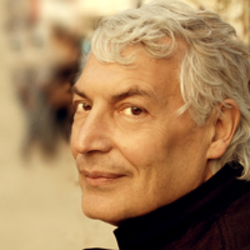 Actor at the Riga Russian Drama Theatre in Latvia. During that time I did a lot of dubbing, voice over and narration work for the Latvian Film Studios and the Latvian State Radio as well as commercials for Tallinnfilm. Voice-overs and commercials at the Moscow Radio "Moscow Echo" during theatre director studies (2 years). Upon returning to Riga worked as a stage director and actor/reciter at the Latvian State Philharmonic, launching a highly successful solo performance career touring all over the Soviet Union with literature and poetry recitals incorporated into theatrical one-man performances (often with music). At that time I worked again as narrator and did voice overs and recorded commercials for Latvian Film Studio And Latvian State Radio.

From 1994 until 1997 worked as a freelance narator at the Russian Service of the BBC Radio, recording numerous literature programs and Audiobooks/Radio-plays for "Russian Features". For the economics program "Marshal Plan" (also BBC Radio) I also did a lot of voice overs and wrote amusing lyrics for songs that were an integral part of the program. At that time I also recorded select scenes from "Hamlet" and "King Lear" for the musical project "Hamlet & King Lear" featuring the music of Dmitry Shostakovich performed by the City of Birmingham Symphony Orchestra for the internationally acclaimed "Floating Earth" Recording studio in London. From 1999 onwards I've been touring with music-poetry recitals in Germany, Latvia and Russia.

Since 2006 I've been recording literary programmes for the Latvian State Radio (Latvijas Radio 4).

Since 2007 doing voice overs from my home studio.