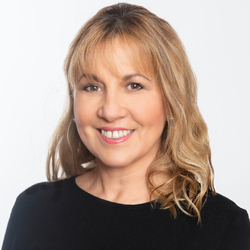 Most recently seen in in the NZ Regional Tour of Menopause The Musical, Circa Theatre's 40th anniversary production of Side By Side By Sondheim, Mrs Johnstone in Blood Brothers, Margaret in Carrie The Musical and Donna in Mamma Mia!, Julie’s career spans over thirty years. She has worked in New York, Britain, New Zealand and Australia performing in shows as diverse as Chess, Evita, The New Rocky Horror Show, Grease, Me & My Girl, Anything Goes, The Pirates of Penzance and Oliver!. Julie has worked in concert with renowned Australian Musical Director, Kellie Dickerson as a backing vocalist for the late Rob Guest, and has performed her cabaret shows East Of The West End, The Dating Game and In Her 40th Year in Sydney.

She also has her own one woman show Julie & Friends – a fast change show in which she performs as fourteen outstanding female vocalists.

Julie was an original Australian cast member of The Witches of Eastwick, and received personal praise from Cameron MackIntosh when she played several performances in the role of Felicia, for which she was first understudy.

In 2005, Julie played the role of Rosie Greenwich in Leader Of The Pack, at Crown Casino, Melbourne.

After returning to New Zealand in 2006, Julie was offered the position of Course Coordinator of Musical Theatre for the Two Year Diploma course at The Wellington Performing Arts Centre (now Te Auaha), a position she held for 5 years. Since then, she has played the role of Little Becky Two Shoes in the Downstage production of Urinetown, performed in Stagecraft Theatre’s The Rise and Fall of Little Voice as Mari Hoff and Velma von Tussle in Hairspray for Wellington Musical Theatre.

Julie has trained extensively in the Estill Method for Voice and has appeared in television commercials in Australia and NZ.

She is in constant demand as a  director, singing coach, voiceover artist and MC.