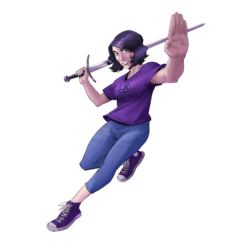 Linsay Rousseau is an LA based actor, voice-over and performance capture artist with over 20 years of theatre and improv experience. She is best known as the voice of Elita-1 in Transformers: War for Cybertron on Netflix, and for her extensive work in video games, including Fallout 76, Vain Glory, Rage 2, NBA 2K20 and 2K21, World of Warcraft, Wasteland 3, Call of Duty Mobile and Elder Scrolls Online. On-screen, she has appeared in episodes of NCIS, Seal Team, General Hospital and she had all the judges fooled in her appearance on To Tell the Truth.​ A bona fide geeky badass, she hosts the weekly geek talk show The Roll Out and is an associate producer and host for Culture Slate.

Linsay is known for her range and versatility. As a stage performer who specialized in character roles and decades of improv, she easily slips into any character and adapts to whatever medium she is performing for. As a classically trained singer, she is a master of her instrument. While she loves all aspects in the industry, it was her stage experience coupled with her time in the Army that drew her to video games and subsequently, performance capture. Along with the vast story telling opportunities that video games afford, she's the type of woman who can throw a punch, swing a sword, shoot a gun, take a hit and yell and die for hours. A true geeky badass.