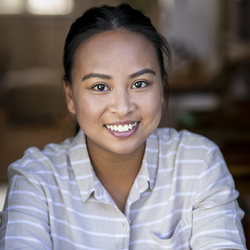 In 2016 she graduated with a Bachelors in Performing Arts Majoring in Screen and Theatre Acting from Unitec. Marianne then joined forces with Proudly Asian Theatre (PAT) as the company producer and co-founder and creative director of Te & Kuya Collaborative (TKC)

Marianne emerged as a fresh playwright (2018) and screenwriter (2020) presenting and featuring in Aotearoa’s first and award-winning Filipino theatre production called ‘Pinay’ and has recently released ‘Mekeni’, Aotearoa’s first Kapampángan short-film, proving her to be a game-changer in NZ’s artistic landscape. She's swiftly up-skilling and joining the screen industry not only as an actor but also as a new producer.

Her most recent voice works include Tales of Nai Nai Season 1 and Season 2 playing a sassy "Evil Spirit" and as an audience favourite - the Filipino "Mama Dugong".

Infante speak Kapampangan and Tagalog fluently and because of this she's able to present many modes of the Filipino accent. She's also confident with a Standard American Accent and Standard RP British.