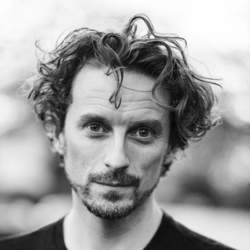 I have a warm, friendly, resonant tone and deliver a natural conversational read.

Adaptable and versatile, from commercials with a cool edge to quirky characters to intelligent and assertive corporate narrations.

"Simon is a British Voiceover Artist and Actor. Growing up on the beach in Cornwall, UK, has certainly lent a relaxed, cool quality to his resonant voice. Perfect for those edgy ad campaigns or friendly corporate narrations. A professionally trained actor he has spent the last 14 years working extensively throughout Europe in Film, TV, Theatre and Recording Studios.
Simon’s acting work has taken him to many unexpected corners of the arts world. He has toured Shakespeare numerous times around the UK and Europe, provided voices and motion capture for video games giant SEGA, been a regular actor for The Royal Opera House in Covent Garden for 10 years, and has performed at prestigious venues including Opera De’ Monte Carlo, Opera De Lille, Opera Verdi Trieste. He has worked widely in TV and Film and is currently awaiting the release of his most recent feature film project, directed by Oscar winner Giuseppe Tornatore, where he is playing a major supporting role."

My voice has been described as: “Warm, friendly, deep, reassuring, authoritative.”

Working both from some of London’s top recording facilities and my own fully equipped professional studio, over recent years my voice has been used to support many international brands.

My studio is equipped with Source Connect, ipDTL, and a Skype phone patch for live directed sessions.