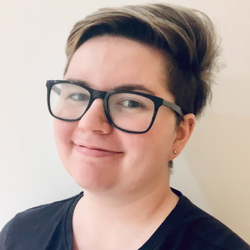 Professional, Dynamic, Powerfully Emotive and Extremely Versatile are but a few of the many terms Chloe’s talents have been described as over the years as they continue to provide voices for a large array of characters, projects and medias. Primarily an animation and videogame voice actor, over the years Chloe has worked for a wide variety of clients on a global scale since the age of 15. Some of their recent clientele and projects includes Hi-Rez Studios "Smite", Cryptic Studios and Magic: The Gathering’s “Magic: Legends”, Trailer Farm and Marvelous Games’ “Story Of Seasons: Pioneers of Olive Town trailer” as well as some indie projects including “Hex” from Dawkosgames, “The Hero We Need” from Vodoo Studios and “My Sweet Zombie!” by Tsundere Studio. These are but a few of their rapidly growing resumé. Chloe has also received training from some of the biggest names in the voice over industry, specialising in everything from ADR, Animation and Character, to Commercial Voice Over. With a fully equipped broadcast quality studio, Chloe is ready at the drop of a hat to bring life to your project, and deliver smiles to the masses.